What Does Oogenesis Mean?

Oogenesis is the process of development of female gametes (also called ova or eggs), that takes place in ovaries. The process of oogenesis begins before birth and then development is suspended until puberty. Development resumes with ovulation and the final step (meiosis II) is completed only if fertilization occurs.

The process of oogenesis begins before birth with the formation of germ cells called oogonia that have the ability to develop into mature eggs. These oogonia are formed before birth. However, most of these oogonia degenerate before birth, and the remaining enter the first meiotic division as primary oocytes (also called immature eggs).

After duplicating their genetic material post-birth, primary oocytes are arrested in prophase I and remain arrested at this stage of development for years until the sexual maturity of the individual when ovulation starts. No new primary oocyte will be produced after birth.

The immature ova then resume the cell division where they left off until they finish the meiosis I (cell division). This yields two daughter cells, each receiving an equal number of chromosomes. This is not the case with the cytoplasm of the primary oocytes, as the entire cytoplasm remains with one of the daughter cells, which is then designated as the secondary oocyte. The other daughter cell that lacks cytoplasm develops into a first polar body. The polar body is nonfunctional, and therefore, degenerates or gives rise to 2 more polar bodies. 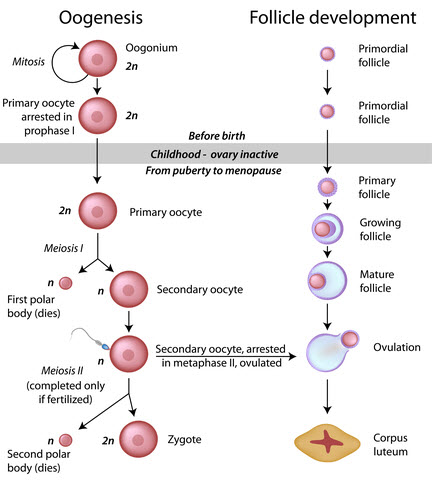