Definition - What does Ectopic Pregnancy mean?

When an ectopic pregnancy occurs in the fallopian tubes it may be called a tubal pregnancy.

During ovulation, a fully developed egg breaks out of a follicle in the ovary and it is propelled into the fallopian tube. If sperm is in the fallopian tube when the egg arrives, fertilization occurs and the fertilized egg becomes a zygote. The zygote spends several days developing additional cells, transitioning into an embryo, and traveling towards the uterus. Once in the uterus, the embryo implants into the nutrient-rich endometrium, where it is supported into growing into a fetus.

During an ectopic pregnancy, the zygote fails to leave the fallopian tube. Instead, it develops into an embryo inside of the fallopian tube, and implants into the thin walls of the tube. In rare circumstances, implantation may occur in other locations, including: 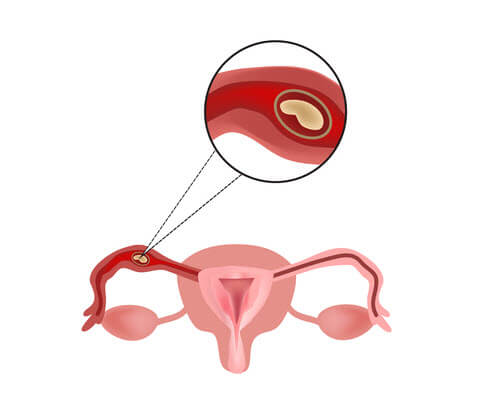 Some ectopic pregnancies may be recognized during the earliest weeks of gestation. While the pregnancy has not implanted correctly, the body would still recognize the fertilization and begin to release hCG, the pregnancy hormone. Thus, a home pregnancy test would indicate a pregnancy was occurring. However, early medical scans may detect the abnormality.

However, some women may not be aware they are pregnant, or scans may be inconclusive. In these cases, the ectopic pregnancy may go undetected. In this case, there is a risk of fallopian tube rupturing, resulting in permanent damage or total loss of the tube. If not treated promptly, it can lead to maternal death.

However, if the ectopic pregnancy ruptures, sudden and severe symptoms ensue. The rupture is considered a true obstetric emergency and requires immediate treatment. Symptoms of a rupture include:

Treatment for an ectopic pregnancy is based on the stage at which it is discovered and the size of the embryo. Treatment options include:

It is possible to conceive a successful pregnancy following an ectopic pregnancy. However, if a fallopian tube was damaged, fertility treatments may be required to aid the process.

While the risk of having an additional ectopic pregnancy is increased with future births, close monitoring of following pregnancies will assist in reducing risk and potential harm.

Secondary Infertility: What You Need to Know
5 Things I Learned From Experiencing Pregnancy Loss
Reframing Male Infertility
Our Journey to Pregnancy With Donor Eggs
How Men Can Talk About Their Needs During Infertility
A 12 Step Guide on What to (Really) Expect with IVF