What Does Tubal Patency Mean?

Tubal patency refers to the openness and lack of blockage in the fallopian tubes. If the fallopian tubes are patent (open), an ovulated egg can be fertilized within one of the tubes and travel to the uterus for potential implantation.

If the tubes are blocked, the sperm and egg cannot meet, and conception will not be possible.

Blocks or occlusions in the fallopian tubes are a cause of female factor infertility known as tubal infertility.

The fallopian tubes are part of the female reproductive tract that extend out from either side of the uterus. After an egg is ovulated, finger-like projections on the ends of the fallopian tubes, called fimbriae, pick up the egg.

Once the egg is inside the fallopian tube, the cilia help propel the egg through the tubes and towards the uterus by beating in synchrony. If sperm is present, fertilization occurs in the fallopian tubes, and the resulting fertilized egg, called a zygote, travels through the tube to reach the uterus where it may implant within the endometrial wall.

Because of the critical role that fallopian tubes play in the process of fertilization, patency, or openness of the tubes is critical for female fertility.

A tube may be partially or fully blocked. Fully blocked tubes do not allow the sperm and the egg to meet, making fertilization impossible. 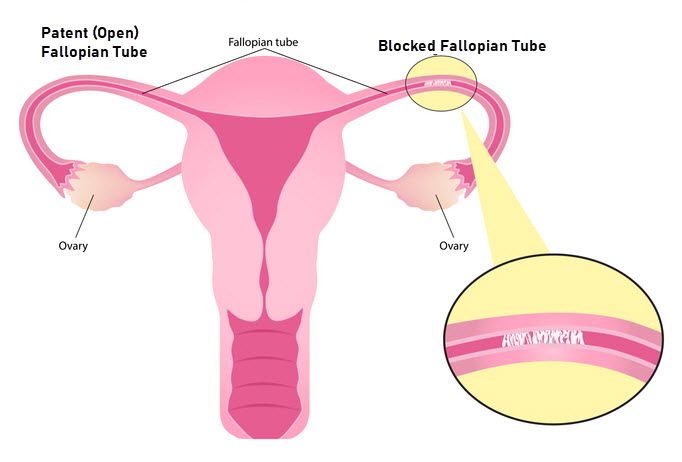 Fallopian tubes may become blocked due to:

How is tubal patency assessed?

Tubal patency cannot be assessed on a regular ultrasound. Instead, a hysterosalpingogram (HSG), a type of X-ray, will be performed.

During this test, a small catheter is inserted through the cervix into the lower uterus. A contrast dye is then injected into the uterus and X-rays are taken of the pelvis.

This allows the technician or physician to see the dye being injected and assess whether or not it is freely passing through the fallopian tubes and spilling into the pelvis.

If there is a blockage in any part of one of the fallopian tubes, the dye will struggle to flow around it. This will be seen on the ultrasound and allows the technician or physician to identify the location of the obstruction.

What are the treatment options?

Treatment for a blocked tube depends on the location of the obstruction. If only one tube is blocked, fertility medications such as Clomid could be used to increase the chances of ovulation on the side of the patent tube.

Alternatively, laparoscopic surgery may be indicated to remove the blockages if they are relatively small.

Larger blockages may be repaired by removing the damaged section of the tube and re-connecting the ends or by removing the fallopian tubes completely and proceeding with IVF.

If the fallopian tubes are dilated or fluid-filled (known as hydrosalpinx) and beyond repair, it may be necessary to remove them and proceed with IVF as the presence of hydrosalpinges during IVF can decrease pregnancy rates by up to 50%.

Women with tubal obstruction who wish to become pregnant and do not want to undergo surgery may consider in vitro fertilization (IVF). This procedure eliminates the need for open tubes by removing the eggs from the ovary with a needle during a minor surgical procedure called an egg retrieval, fertilizing the eggs in the laboratory to create embryos and then transferring single embryos back into the uterus during an embryo transfer.