The Surprising Fertility Advice I got from my IVF Doctor

For women of advanced maternal age who have no other fertility problems, it’s worth considering that sometimes Mother Nature really does know best.

The moment my first child was born, I wanted another one. Sleepless nights, blowout diapers and hormonal mood swings did nothing to calm my baby fever. My husband thought I was crazy, but he went along with my plan to try to conceive a sibling right away. Unfortunately, my body had other ideas.

It took us about six months to conceive, and then I promptly miscarried. A few months later, I had another chemical pregnancy: lather, rinse, repeat. The simple explanation was my advanced maternal age. At 41, I was lucky to already have one baby. Having a second child was far from guaranteed. But I didn’t want to give up; creating a sibling for my daughter and completing our family was too important to me.

Seeking Help From a Reproductive Endocrinologist

I sought the help of a reproductive endocrinologist recommended by my OB. After a full work-up, I was pronounced healthy and fertile—for my age. I could keep trying to conceive, but my miscarriage rate would be about 40%. What worried me about that statistic is all the time I would likely waste trying to get pregnant, only to miscarry. I wanted to increase my odds and speed up the process before I got any older. To me, that meant in vitro fertilization (IVF).

The fertility practice was so confident in their IVF success rates that they offered three tries for the price of two. I figured we couldn’t lose. The next few months were filled with blood tests and ultrasounds (not easy while schlepping a toddler), expensive trips to the pharmacy and painful shots to the abdomen. As anyone who has tried IVF knows, it’s a huge commitment, physically, emotionally and financially, but there was nothing I wouldn’t do to increase our chances of having another baby. At the end of the first cycle, the doctor transferred four embryos, making me worry—and, okay, fantasize a little--about multiples. I needn’t have worried. None of the embryos implanted. So I pressed forward with our second cycle. Lather, rinse, repeat.

The Surprising Advice From Our RE Was...

After each failed cycle, our doctor met with us to discuss his findings. Each time, he tweaked the medications. Each time, I held out hope. But after the third failure, I was devastated. Out of 10 embryos (across three cycles), I hadn’t even had one positive pregnancy test. Given our total lack of success, I was certain the RE would tell us to give up or move on to donor eggs. What he told us next was totally surprising.

“If you want to try another cycle, I’ll do it,” he said. “But I don’t recommend it. If I were you, I’d keep trying the old fashioned way.” His reasoning: my older eggs were fragile. They didn’t “like” being removed from my body and manipulated in a lab. The IVF process may have been damaging them, and limiting my chances of a successful pregnancy. Conceiving naturally would actually be the safest course for my older eggs. So if I had the emotional fortitude to endure the additional miscarriages I would likely face, there was no physical reason I couldn’t keep trying.

How I Finally Got Pregnant at 43

My husband and I were stunned. Our fertility practice didn’t want our money. They wanted us to go home and have sex. So that’s what we did. Unwilling to leave it all up to chance, I also saw a fertility acupuncturist (although the ASRM states it isn't beneficial for improving pregnancy rates) for a solid year. After two more miscarriages and a lot of waiting, we finally conceived our second daughter when I was 43. It felt like a miracle. And that miracle is now a walking, talking toddler named Chloe.

Although the RE didn’t have a direct hand in the conception of our second child, my husband still considers him the hero of our story. If he hadn’t delivered that unexpected advice, we might have given up or wasted a lot more money and time on a process that wasn’t working for us.

I don’t think my RE’s recommendation applies to everyone. Certainly, I know many women for whom IVF was the only solution to their very real fertility issues. But for women of advanced maternal age who have no other fertility problems, it’s worth considering that sometimes Mother Nature really does know best. 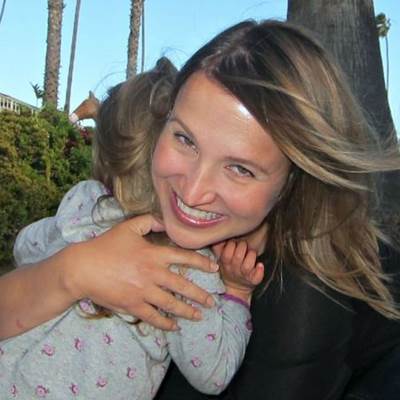 Amy Wruble is a regular contributor to mom.me and Momtastic. Her work has also appeared in The Huffington Post, Parenting, iVillage and Scary Mommy. As the mother of two wonderful girls, she is passionate about helping women laugh through the pain as they navigate the rocky road of fertility, pregnancy, and motherhood.

5 Things I Wish I Could Tell My Egg Donor