Sometimes Getting Pregnant is Not the Issue

The end goal isn’t to be pregnant—it's to have a baby.

“At least you know you can get pregnant.”

This is a phrase that I have heard countless times over the last two years, from well-meaning strangers, family, and friends who want to help, and even others in the infertility community. This is an example of toxic positivity, the phenomenon of people forcing a “positive spin,” to cover up a person’s true emotions or experiences.

“At least you weren’t that far along when you miscarried."

This is something that we in the infertility community experience far too often.

When my husband and I started trying to have a baby, I found out only two months later I was pregnant. In fact, I was pregnant three times in 2019, and I was even on birth control for two months of that year.

I know that there are some women who try for years and years, only to be devastated every single month with yet another negative pregnancy test or the arrival of their period. I can’t pretend to understand that heartbreak and disappointment.

Getting pregnant was never my problem. I have been pregnant three times, but all three of those ended in a loss. And losing a pregnancy is the hardest thing I have ever had to experience. While I know that my body is capable of being pregnant, I don’t know that it’s capable of staying pregnant. And after all, the end goal isn’t to be pregnant—it's to have a baby.

Getting pregnant was never my problem. I have been pregnant three times, but all three of those ended in a loss.

Infertility and Pregnancy Loss are Both Tough

While my recurrent pregnancy loss led to the infertility diagnosis, it plays a much bigger role than just that. It has also played a huge role in the mental and emotional aspects of our infertility and IVF experience.

Even when someday I (hopefully) have living children, I will still grieve those losses. It’s something that will never go away. I will remember every due date and always wonder who that baby would be. How old would they be? Red hair like their dad or brown hair like mine?

I am not sharing this to say that my struggle is greater than yours. Or that people who haven’t lost a pregnancy have an “easier” infertility journey. That could not be farther from the truth, and everyone’s experience is so unique.

I firmly believe that two people can have totally different situations, yet their feelings are equally valid.

People can have totally different situations, yet their feelings are equally valid.

I was diagnosed with a chromosomal balanced translocation (when two pieces of chromosomes break off evenly and switch places), and low anti-mullerian hormone (AMH) (suggesting fewer eggs that may not respond as well to treatment).

We decided that pursuing in vitro fertilization (IVF) was the best route for us. Like so many other “infertiles,” my husband and I have accepted that we will never be bringing children into this world the good old fashioned way.

I just completed my second round of IVF, and I suspect we will be doing many more rounds before even attempting to transfer any embryos. (The transfer is the part of the IVF process where an embryo is placed into your uterus, with the hopes that it will result in a pregnancy).

When that day comes, we will be elated, but probably a little guarded as well. While I know what it feels like to be overwhelmed with excitement at the sight of a positive pregnancy test, I also know the grief that comes with a loss.

I am 0/3 on pregnancies and that statistic terrifies me. After experiencing so many losses, the thought of ever being pregnant again can feel a little intimidating. I realize that’s not something you might expect to hear from someone who is going through IVF! I am putting my body and mind through so much...and yet the desired outcome is a little scary!

I am 0/3 on pregnancies and that statistic terrifies me.

During IVF, you have as many as 3-4 ultrasounds and blood draws per week. It took me a long time to not feel sick to my stomach every time I would have an appointment. It brought back so many memories of being in my OB’s office and getting yet again another round of bad news.

Recurrent pregnancy loss and infertility are the hardest things I have ever had to endure. No questions asked. It has taken a toll on my physical body, my bank account, my sleep, my social life/friendships, and my stress levels.

Our infertility journey is far from over. My husband & I know that it could take a very long time for us to have the two kids that we want so badly.

We have also (sort of ) accepted that it might never happen or might not happen in the way we have planned. But we are both incredibly optimistic that a baby is in our future. If we didn’t have hope, we wouldn’t be giving up so much physically, financially, socially, emotionally, and mentally.

In a weird way, I now have a deeper sense of gratitude than I ever used to. I am so incredibly fortunate to have access to brilliant Reproductive Endocrinologists and great benefits that allow us to afford treatment. It’s a privilege and something that, unfortunately, too few of us have.

It has also validated my decision to marry my husband. I can’t imagine doing this with anyone else.

Over the last few years, I have endured so much. But it has made me stronger and more resilient than I ever imagined. And for that, I am grateful. 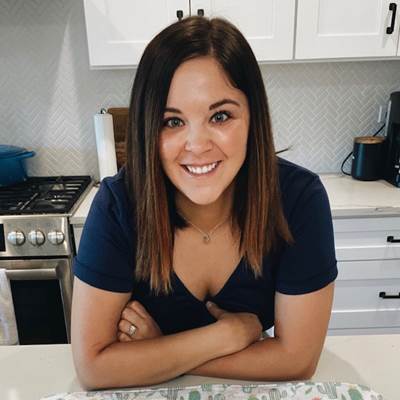 Taylor lives in Chicago with her husband and three dogs (Vern, Norma, and Millie). She and her husband and started trying for a baby in 2018, and unfortunately, that led to three losses and a handful of infertility diagnoses (a chromosomal balanced translocation & low AMH). To date, she has completed two rounds of IVF and is waiting to start her third. She started speaking out about her experience and found it was incredibly cathartic. Since then, she has become passionate about using her voice to raise awareness for pregnancy loss and infertility because too often, people suffer in silence. She hopes to be a voice for those people.

The Importance of Sharing our Miscarriage & Infertility Stories