In certain cases, assisted hatching can be done as part of an IVF cycle with the hopes of increasing the chances of embryo implantation and achieving pregnancy.

Assisted hatching is a technique sometimes used during an in vitro fertilization (IVF) cycle where a hole is made mechanically or chemically in the shell of the embryo before an embryo is transferred back into the uterus.

This procedure is done:

To understand exactly what assisted hatching is, you need to first know the anatomy of eggs and embryos. Every egg has a natural shell around it which has two jobs:

This shell is called the zona pellucida, and it is a thin, gelatinous layer made up of proteins that you can see as a halo around each egg and embryo down the microscope.

Here is a photograph of a fertilized egg; you can see the shell around the embryo, which is still a single cell. 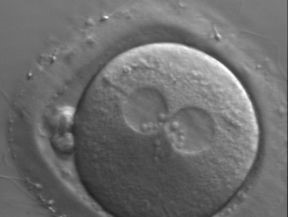 Once the embryo has developed to the blastocyst stage, it has to escape from the shell to implant in the uterus. (Read more about the different stages of embryo development.)

If the shells of the embryos are thicker or tougher than usual, it may be difficult for blastocysts to hatch naturally. In such a case, the embryo cells cannot come into contact with the uterine lining, meaning that implantation fails and there will be no pregnancy.

With assisted hatching, once the embryos are hatched in the lab, there is no chance of them being trapped inside their shells after they are transferred. This does not guarantee implantation.

How is Assisted Hatching Done?

Assisted hatching can be done in several ways; the most common way is using a laser attached to a microscope. This allows the embryologist to make a small precise hole in the shell using short laser pulses. This may also be called laser-assisted hatching.

Other ways are by partial zona dissection or cutting the shell with microtools and acid tyrode's, which is a chemical that dissolves away part of the shell. These methods are all good for making a hole in the shell and are easily done by a proficient embryologist.

You can see a blastocyst that has had assisted hatching with a small section of the shell missing. 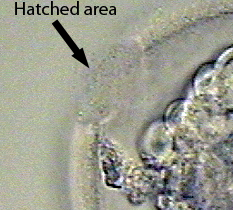 The three embryos in the photograph below are all hatching out of their shells and are ready for implantation. 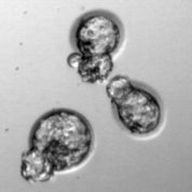 While several studies have suggested the benefits of assisted hatching, it is not necessary a procedure well-suited for everyone.

Some studies have shown no benefit from hatching embryos when comparing two similar groups of patients. It is, however, a standard practice at most clinics and is used in all cases of frozen/thawed embryos and with patients who meet the following criteria:

All embryos that are going to undergo chromosome testing have assisted hatching before freezing. This is so the embryologist can easily do the biopsy and take a small number of cells for analysis.

The embryo biopsy procedure can be seen in the photograph below; you can see the hatched area allows removal of cells for chromosome testing. Read more about preimplantation genetic testing for aneuploidies (PGT-A). 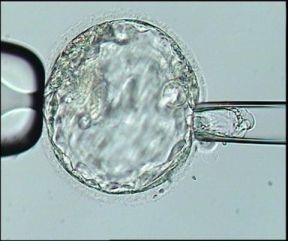 The zona pellucida is not a living part of an embryo, so there is no damage done by penetrating the shell. Assisted hatching is considered to be a very low-risk procedure and will not usually cause any damage to the embryo. Rarely, an embryo can be damaged to the point that it is unusable.

It may increase the chances of an identical twin, but the risk of an embryo splitting is still very low (and does also happen without assisted hatching).

Talk to your doctor if you think you might benefit from this procedure.