What Does Blastocyst Mean?

A blastocyst is a fertilized egg that has developed for 5-6 days and contains 3 distinct features including a fluid-filled cavity trophectoderm/trophoblast (T) cells, and an inner cell mass (ICM).

A blastocyst may also be referred to as a Day 5,6 or 7 embryo.

When a sperm is recognized and penetrates the egg, fertilization occurs. At this point, a zygote is formed. Cells continue to divide and around 5 to 6 days after fertilization, the embryo becomes a blastocyst. A healthy blastocyst will hatch from its protective outer shell known as the zona pellucida. It is around 24 hours after this hatching process that embryo implantation is ready to occur.

Features of a Blastocyst

A blastocyst differs from an embryo because of its advanced cell development, differentiation, and growth. This includes a fluid-filled cavity and two distinct types of cells: 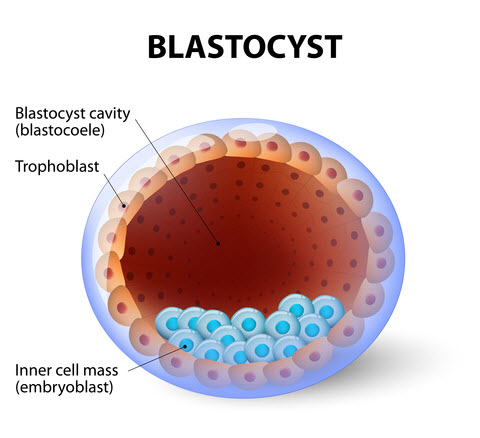 During in vitro fertilization (IVF), fertilized eggs are cultured in a laboratory setting for 5 to 7 days and some will develop into a blastocyst. With either a fresh transfer or frozen embryo transfer (FET) at a later date, the embryo/s are then transferred to a uterus, hopefully resulting in implantation and pregnancy.

Having high-quality embryos to transfer to a uterus is a benchmark in the IVF process and can help predict an embryo's implantation potential. Blastocysts are graded by an embryologist to determine which embryo in a group has the greatest likelihood of resulting in pregnancy. Criteria include:

For a couple or individual undergoing IVF, it may be required to decide between an embryo transfer and a blastocyst transfer. This is a decision that is informed by the reproductive endocrinologist and embryologist based on a number of factors including the development of the embryos.

This decision comes down the amount of information the embryologist needs to decide which embryo in the group has the highest implantation potential.

With a blastocyst transfer, the timing of uterine placement is more similar to what would occur through natural conception. An embryo has been fertilized for just two to three days would still be traveling through the fallopian tube, having not yet reached the uterus. There is no benefit to culturing an embryo in an artificial environment like a laboratory for additional days, the best place for an embryo to be is in the uterus. Therefore, a blastocyst transfer may be considered a closer imitation of the naturally occurring biological process.

Additionally, because a more informed decision can be made, fewer blastocysts are typically transferred which reduces the chances of multiple pregnancies. While lab-developed embryos may not have enough time to fully demonstrate their overall viability, more advanced blastocysts can.

Disadvantages of a blastocyst transfer can include:

Why did my in vitro fertilization (IVF) cycle fail?