I don’t like to talk about my feelings. Which is exactly why I need to.

That was the text my wife, Emily, sent me from an out-of-town bachelorette party. Two weeks earlier, we’d learned she was pregnant for the second time in six months.

Her first pregnancy had ended in miscarriage. And over the previous few days, we’d begun fearing this pregnancy would end the same way.

While Emily superhumanly survived her dinner, I laid in bed in a state of anxiety, anguish, and impotence.

It was a state with which I’d become too familiar.

Since we’ve started trying to expand our family, I’ve ridden shotgun as Emily has endured three rounds of IVF, three lost pregnancies and countless invasions of her most personal spaces. Reflecting on these experiences, I’ve started to feel that I’ve failed at my No. 1 responsibility — to take care of her — in part because I’ve failed to take care of myself.

While I haven't suffered physically, as Emily has, I have suffered emotionally. I've sweated every ultrasound, stressed through every egg retrieval and absorbed every gut punch of every disastrous diagnosis.

Yet I've kept my emotions bottled up.

Being open, being vulnerable—these things don't come naturally to many men, myself included. And for a long time, I believed that projecting strength was the best way to support Emily.

But all I've been doing is making myself weaker.

Holding in my thoughts, stuffing my worries, swallowing my fears—this is a taxing way to live, especially in troubled times, and it's prevented me from being as strong and supportive as I could and should be for Emily.

That is, until now.

Below, I'm going to do what I've resisted, in spite of Emily’s constant urgings — I'm going to talk about my feelings.

Read: What Men Should Know About Emotions and Infertility

The clock read 4:32 a.m. when Emily called for me from the bathroom. The day before, an ultrasound had revealed no heartbeat. Her first pregnancy was over. While a D&C was scheduled for noon, it became clear that procedure would be unnecessary.

And I had no idea what to do.

I was clueless as to what would make things better, and I was terrified of making them worse.

I’ve never felt so helpless because I’ve never seen anyone in that much pain. And there was nothing I could do to stop it. At times Emily was crawling between the bedroom and bathroom because it hurt too much to walk or for me to carry her. When she got back in bed, I dabbed a cold washcloth on her forehead. Her muscles tensed and her sobs deepened, as motherhood slipped away from her. And all I could think to do was hold her, while the world came crashing down around us.

But even this seemed insufficient.

This was my wife, and that was my baby. And it was my job to protect them both.

Yet I felt that I’d failed to protect either.

From the moment I walked into the OB-GYN’s office for Emily’s first confirmation-of-pregnancy appointment, I knew I’d found it: No man’s land. Pregnancy — and all that comes with it — is a woman’s world, and rightfully so.

But when you’re wedged into that chair in the corner of the doctor’s exam room, like a child in timeout, it’s hard to believe you’re anything but in the way.

To her credit, Emily has made it clear that we’re on equal footing. Yet I still feel like I’m living on eggshells.

I don’t want to say the wrong thing at the wrong time and do more harm than good.

I don’t know. I don’t want to say the wrong thing at the wrong time and do more harm than good.

Which is why when I’m in doubt, I defer, because I never want to add to Emily’s stress level.

But as our struggles have dragged on, I’ve realized I have to assert myself more. If there’s something I feel strongly about, I owe it to myself, Emily and our unborn child to speak up.

And the way I’ve learned to pick my spots is by asking myself If I don’t say it, will I regret it?

For weeks, we’d suspected it was over. But hearing the doctor confirm that Emily’s first pregnancy would end in miscarriage still felt like a kick to the jaw. We were sitting in separate chairs, and after the doctor told us, Emily collapsed into mine, onto me. I held her up as best I could as she cried on my shoulder.

For as devastated as I was by the news, I’d also never felt more empowered.

On our wedding day, we'd vowed to support one another in good times and bad. And on that darkest of days, I was proud to uphold that vow. She’d never been more exposed, more vulnerable, more wrecked. And it was not only my responsibility, but my honor to help take care of her.

In the days that followed, I relished my role as her rock. I hadn’t been able to stop the tragedy from happening. But I was now emboldened to do everything possible to help her through it.

At our lowest, it would've been easy to get overwhelmed by the big picture, to get lost in what might or might not ever happen. Instead, I doggedly kept us focused on the smallest steps, on whatever was right in front of us. I’d ask myself: What is the next thing I can do to keep us moving forward?

Doing so gave me a sense of strength, and control, and of progress — even when the answer was as simple as just breathing in and out.

Infertility, pregnancy loss — I think it’s harder on the woman, for all the obvious reasons.

But that doesn’t mean the guy gets off scot-free.

I’ve had to agonizingly watch my wife suffer. I’ve had her look to me for confidence that I didn’t have myself. And I’ve, like Emily, had the prospect of parenthood repeatedly ripped from my fingers.

I want to stay positive. I want to believe that, eventually, Emily and I will hold a healthy child of our own. And there are plenty of times I do. But there are other times when our misfortunes feel less like bad luck and more like our fate.

It’s in those moments I feel fragile, defeated, and a fraud of a prospective father.

And the only thing that pulls me out of those nosedives is the mantra that’s carried me to this point: Hope for the best; trust in what’s next.

I hope that Emily and I will one day become parents. Yet I trust that whatever happens, good or bad, is what’s supposed to happen.

And hope, in the face of fertility struggles, is the greatest feeling of all.

For as trying as all this has been, it would’ve been infinitely worse were it not for Emily. Her grace, her courage, her ability to respond to tragedy — it’s all made a difficult time a little easier. She’s had every reason to lose it, yet she keeps pushing forward.

I am in absolute awe of her. She’s the strongest person I know. Saying that not only gives me pride, but it also gives me hope.

And hope, in the face of fertility struggles, is the greatest feeling of all. 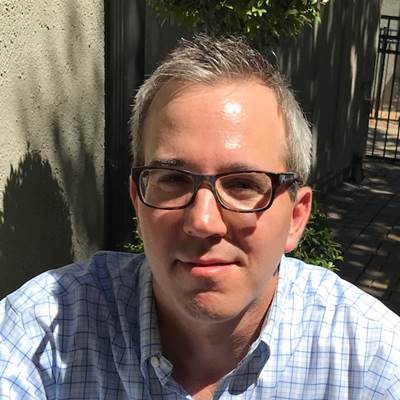 Brent Stoller is a Houston-based writer who has been featured on Pregnantish, Bumps to Baby, Our Misconception, the Huffington Post and other publications. In trying to expand their family, he and his wife, Emily, have endured three pregnancies, three lost pregnancies, and one continuous heartbreak. Yet they still hope they will one day hold their own healthy child. By sharing his struggles with infertility and pregnancy loss, Brent aims to help others get through theirs.

What Men Should Know About Emotions and Infertility